The Great Brain Experiment is a unique app for iOS and Android devices which aims to help scientists better understand how the brain works. Developed for neuroscientists at The Wellcome Trust Centre for Neuroimaging and UCL, in collaboration with The Wellcome Trust, for Brain Awareness Week, the app contains four games, each of which measures a specific brain function. The app is designed to make players more aware about how their brain works. It also reports data on the players’ performance back to the scientists who will be able to use them to learn about how brain function varies in the population and also how it changes as we age. 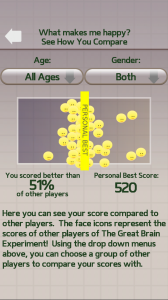 Your score is compared to other players

At the end of each game, the player is shown a chart showing how their score fits in with other players’ performances. They can also compare their score by age or gender with others. The game interfaces with a database backend created at The Wellcome Trust Center for Neuroimaging specifically for the game. The chart uses face icons to represent other players so as to be understandable and friendly to non-scientists.

The Wellcome Trust contacted White Bat Games with a good idea of what they wanted, but felt that our games experience would help them ‘gameify’ the whole experience and make it attractive to the general public. They wanted people to have fun while participating and that was something we kept in mind throughout the project, trying to balance the needs of the experiments with the game’s entertainment value. We relished the chance to produce a mobile game with loftier goals than just killing time! 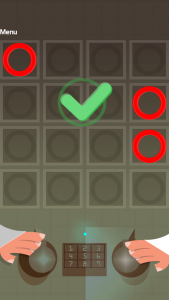 How much can I remember?

We worked together on what the games should look like and how they should play. The length of each experiment was an important factor as to how many people would participate, so we tried to keep them all to a guideline of five minutes.

We experimented with the art style, looking at games that are out there and ones that have tried to be educational and making a judgement about what would work for the target audience. A bright, vector-graphic-style art style emerged from this, and the eventual result of that was our two scientists Dennis and Sarah who guide the player through the game.

Lots of discussion was had on the type and amount of feedback to give, as we wanted the player to understand what was happening but not have the feedback affect their behavior and so the results of the experiment. 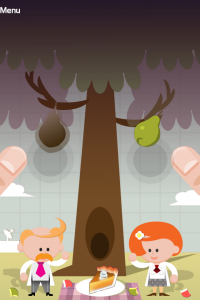 In ‘How much can I remember?’ the player must remember patterns of red lights on a board. The patterns’ complexity varies with how well the player performs so as not to frustrate the player but still to stretch them. A person’s working memory varies by many factors, and we hope the game will help scientists understand how a person’s memory is affected by conditions such as dementia.

In ‘Am I impusive?’, the player must touch fruit as it falls out of a tree. If the fruit turns bad half way down, the player must resist tapping it. This game is designed to study the urges that control our actions, and how difficult it is to stop an action just before we’re about to perform it. People with addictions or ADHD are worse at stopping these urges, and this game aims to provide statistics on how this capability varies. 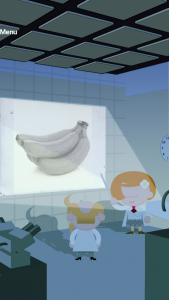 How much do I see?

The third game, ‘How much do I see?’, is designed to study how the brain processes what the eyes see. In particular, the ‘attentional blink’ effect describes how the brain finds it far more difficult to notice two images if they’re shown close together in time. Attention is often one of the first things to go wrong in dementia, so the results will help scientists study this process.

The fourth game, ‘What makes me happy?’, is a test of the player’s judgement. The player must make a choice about taking a chance risking their points to get a reward, or take the safer but less rewarding option. Scientists think that differences in judgement could be down to differences in brain chemistry or even your genes! By asking how happy the player is after each choice, scientists hope to be able to see how positive or negative reinforcement affects people’s happiness. 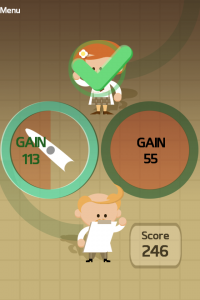 What makes me happy?

White Bat’s proprietary engine was used again for this project, and it made it possible to produce prototypes rapidly and iterate on the changes, sometimes on a daily basis. We added functionality to allow the engine to communicate with the server and submit the players’ data, and also to allow players to share their scores on Facebook, Twitter and other social networks. This was quite a task considering the number of devices we support, and the varying support built into phones!

We’re please with how the game turned out, and hope it will find its way into many people’s hands.

Download the app for free by clicking the icons below: