Horrid Henry’s Horrid App is a game developed for the release of the Horrid Henry movie in the UK. It was released on iPhone and iPad on July 31st 2011. Designed in conjunction with the brand owners, we took great care to create something which fitted in to the world of Horrid Henry and the plot of the movie. We used our own proprietary engine for the game, which is very suited for producing addictive 2D games. 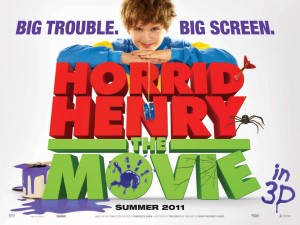 The Brief
We were provided with production materials from the film during it’s production so we could build cartoon versions of the locations and characters. It was decided early on that it made sense to make the game in the style of the Horrid Henry cartoon series, rather than try and use live action assets from the film, and our artist took great pains to replicate the style of the cartoon series in the game’s animation and backgrounds. We were using locations from the live action film and presenting them in a cartoon style, so we had to work out how to represent these in a recognisable way. All the artwork was created by White Bat Games and then approved by everyone involved. We know how exacting the requirements can be when it comes to much-loved characters! We then designed a two minigames based directly on scenes from the movie. Each game was designed to be enjoyable and fun in it’s own right, and also to have hidden extras for players to find on repeated plays. The designs were put together in discussion with the publishers and brand owners. 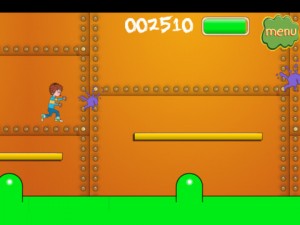 The Bog of Doom

The ‘Go Giddiantus!’ minigame is part of the ‘endless runner’ genre. The game has short introduction and winning cutscenes to set the scene. Then, the player, playing as Henry, chases Moody Margaret through the halls of the Giddiantus school, as in one of the action scenes from the film. By touching the screen, the player can make Henry jump. By timing their jumps well, the player can avoid obstacles and collect bonus objects. Each time the game is played, the game is different, as the stages are built up from pre-designed pieces selected at random each time you play. Parts of the background can attack Henry, like falling clocks, busts, and trophies, and Margaret also throws dolls behind her to slow him down. Some sections have multiple paths where you can collect extra points bonuses. The cabagge bonus even allows Henry to briefly fly, powered by his own farts!

The ‘Flick the Bogey’ game has Henry bursting a water balloon on Moody Margaret’s head in a sequence of fiendishly designed levels. We use a physics engine here so the water balloon moves and bounces in a convincing way. Various other elements were added such as a bird flying overhead which could be hit, various collectable points icons, and bonus stages with different rules to break up the action. 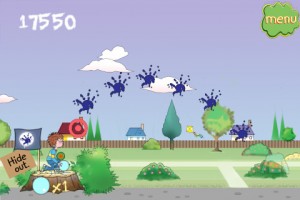 Tying the other two games together is ‘Dress Up’, a game where players can be a little creative by putting together their own Horrid Henry cartoon scenes. They can select a character and a background, and dress them up with many clothing items and accessories recreated from the cartoon series. We worked with the brand owners to decide which items would be the most recognisable and useful in creating funny scenes, and were provided with the original reference artwork for each object, which we used to ensure that they all look authentic. We designed an easy to use interface for children to drag and drop the items onto their picture. Once they’re finished, the picture can be saved to the Camera Roll on the device and from there it can be shared with friends.

Extra hidden clothing items can be found in the ‘Go Giddiantus!’ and ‘Flick the Bogey’ games which, once found, appear within ‘Dress Up’. This gives players plenty to do once they think they’ve mastered the game. We made sure that it’s quite a challenge to get everything! 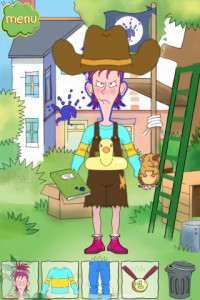 We always design our products with the requirements of the specific brand and it’s intended audience, and for this game it was clear that it needed to appeal to very young children as well as older kids. The ‘Dress Up’ game was designed so that very young kids can have fun with it – as there is no way of losing the game, and fine control is not necessary, avoiding frustration. For the older kids we also added hard modes to ‘Go Giddiantus!’, a Challenge Mode to ‘Flick the Bogey!’ and plenty to discover on repeat play, extending the life of the product.

We think the game’s quality speaks for itself, so have fun with it!

Purchase the game on the iOS App Store

Could White Bat Games design a game for you? We’re eager to hear from brands that want to gain a presence on the App Store. We can design a high quality product that your customers will love. Drop us a line!