Royal Winton English Hedgerow is a free augmented reality app for the iPhone, iPad and iPod touch. Together with Unanico and Andrew Tanner Design, we designed software that allows the world of the English Hedgerow to jump into the real world, creating the first ever augmented reality plate! By pointing your smartphone at the English Hedgerow pattern, you’ll see a bullfinches, mice and butterflies move around your plate as if they were in the room with you. You can move around the pattern and move closer in to see all the intricate detail on the artwork. The graphics and real world plate combine in a way that creates something really special.

This unique effect was created using augmented reality technology. For this, we licenced the excellect Obvious Engine, which was ideally suited for creating the effect we wanted. Unanico’s skilled art team created the graphics for both the plate and the app, and White Bat Games created the app itself. 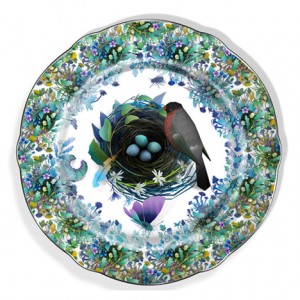 When the app launched on Apple’s iOS App Store, it was an instant hit, and was soon captivating iPhone owners woldwide. The app prompted many media outlets to write about the app and it’s creation, including Craft Magazine, who saw fit to put the English Hedgerow pattern on their magazine’s front cover!

You can purchase the plate from Designed in England.

Entertaining apps can really help to promote a brand. Could we help you do the same? Drop us a mail!