See the game on the iTunes store

Hidden Anthologies: Pride and Prejudice is a Hidden Object Adventure developed for Europress Games based around Jane Austen’s classic novel. We designed it to follow the plot of the book familiar to fans, and created many entertaining game ‘scenes’ based around events in the novel. 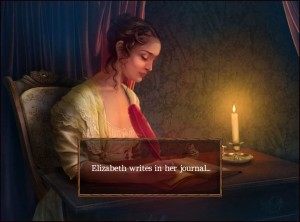 The first concern when developing a game like this is authenticity. The book is much loved and fans will expect a certain level of respect for the original work. Everything we put into this game needed to be filtered through the eyes of an Austen fan, and we wanted to keep the characters, dialog and plot points in keeping with the period and of the novel. Luckily, being such a popular novel, reference material and analysis of the book were easy to come by! 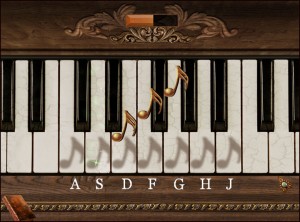 Fortunately, there were plenty of events in the book that lent themselves to being turned into game scenes. Playing the piano to Lady Catherine de Bourgh, tending to Jane when she falls ill at Netherfield, and tending to Mrs Bennet during one of her frequent attacks of nerves were in the design from the start.

The design of the point and click adventure scenes was quite a complex process, as each scene involved finding and combining objects in different ways. There is a fine line between puzzles which are cunningly hard and needlessly obscure, so publisher feedback was sought at each stage and the results were acted upon. 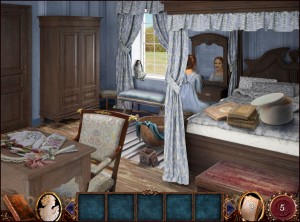 In order to encourage players to play the game through multiple times, completing the story once will unlock a special mode. I’ll not spoil it by explaining more! Also, scraps of Elizabeth’s diary are scattered throughout the game to be spotted by the eagle eyed. At any time, the player can call up the diary game, and reassemble those pieces they have found into diary pages, revealing more about the characters and back-story.

The laconic Mr Bennet is possibly our favourite character from the book, so we wanted him to have a prominent place in the game. He becomes the player’s hint system, providing advice and the odd witty comment when the player is struggling with what to do next. Players must collect wax seals from hidden object scenes to tempt him into helping you out. 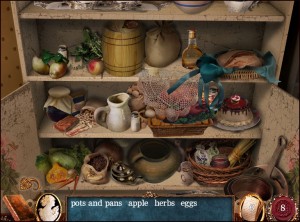 White Bat’s propriatary game engine, uniquely designed to create 2D games on multiple platforms, was extended for this project with a scripting engine which allowed the puzzles to be put together. The engine was already built with support for multiple platforms in mind, and for this game it was extended in order to support Microsoft Windows and Apple’s Mac OS X.

Gameplay variety was a very important design goal, so a flexible scenes system was built which allowed us to mix together hidden object, adventure, jigsaw and other gameplay elements with story elements easily. A process was also developed to allow the artists creating the locations to specify how the player could interact with the scenes and how to ‘dress’ the locations for each scene where it appears.

Our writer spent the game’s development pouring over the novel and arranging as much of Austen’s witty dialogue into the game’s cutscenes as he could. One of the major successes of the game is it’s writing and the way it understands the source material without becoming a parody.

We’re very pleased with how the game turned out. The game is long and the gameplay is varied and interesting, so we hope it will entertain Austen fans around the world.